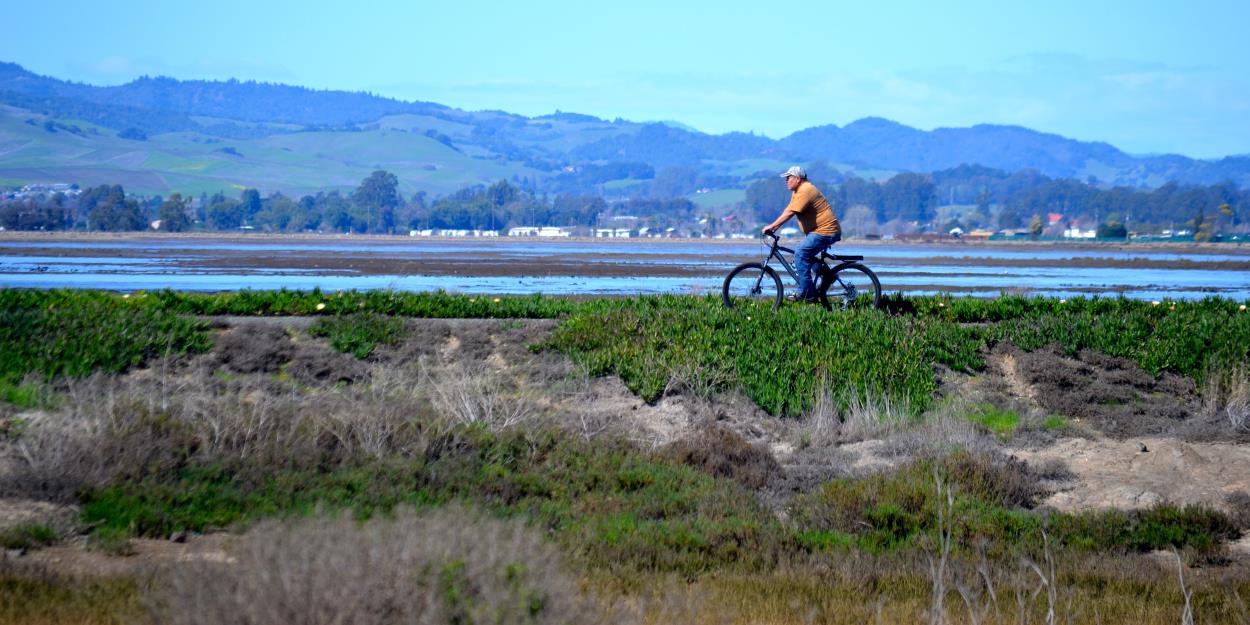 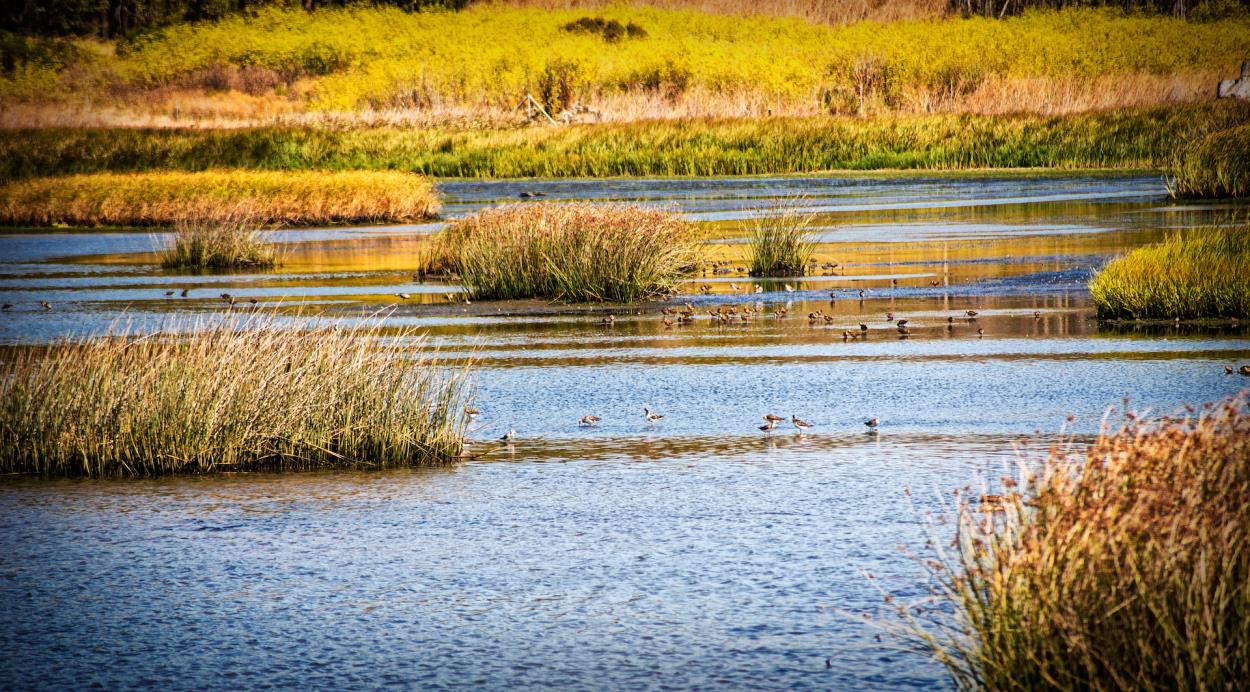 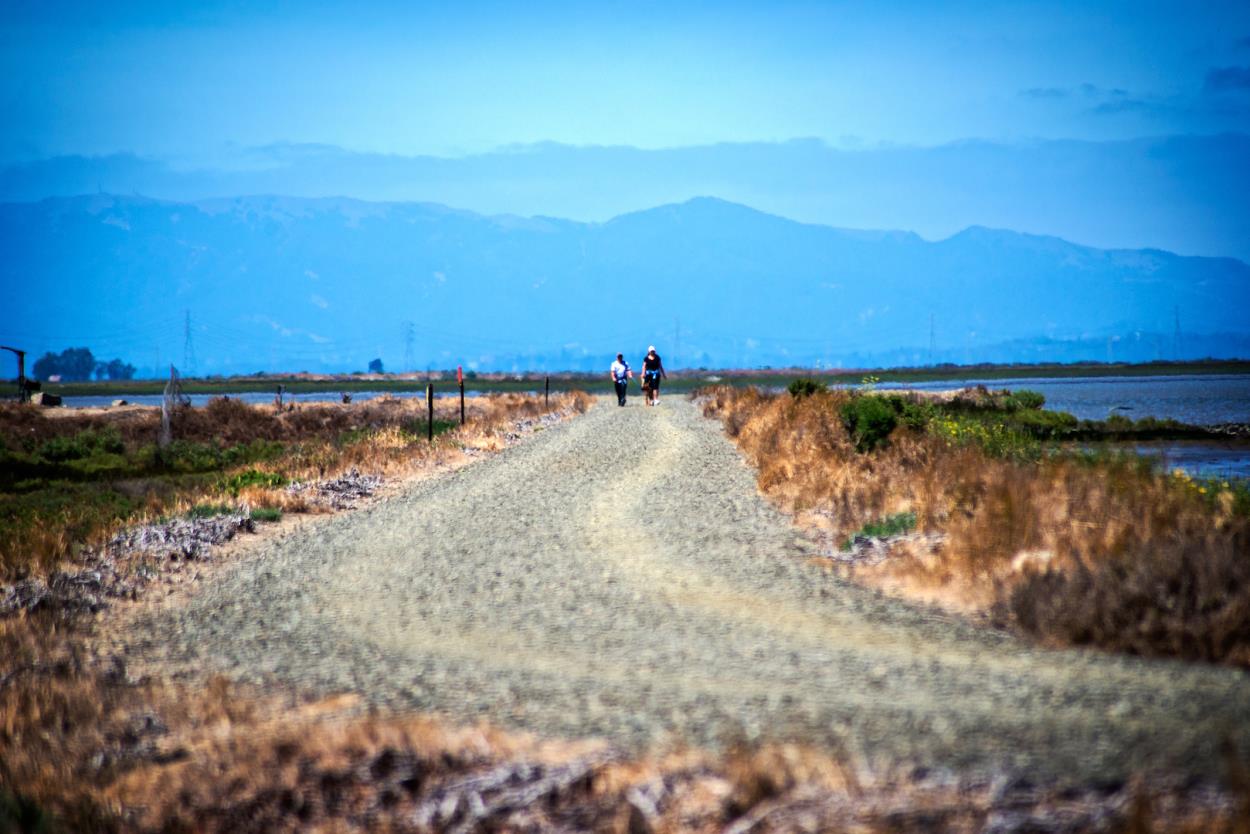 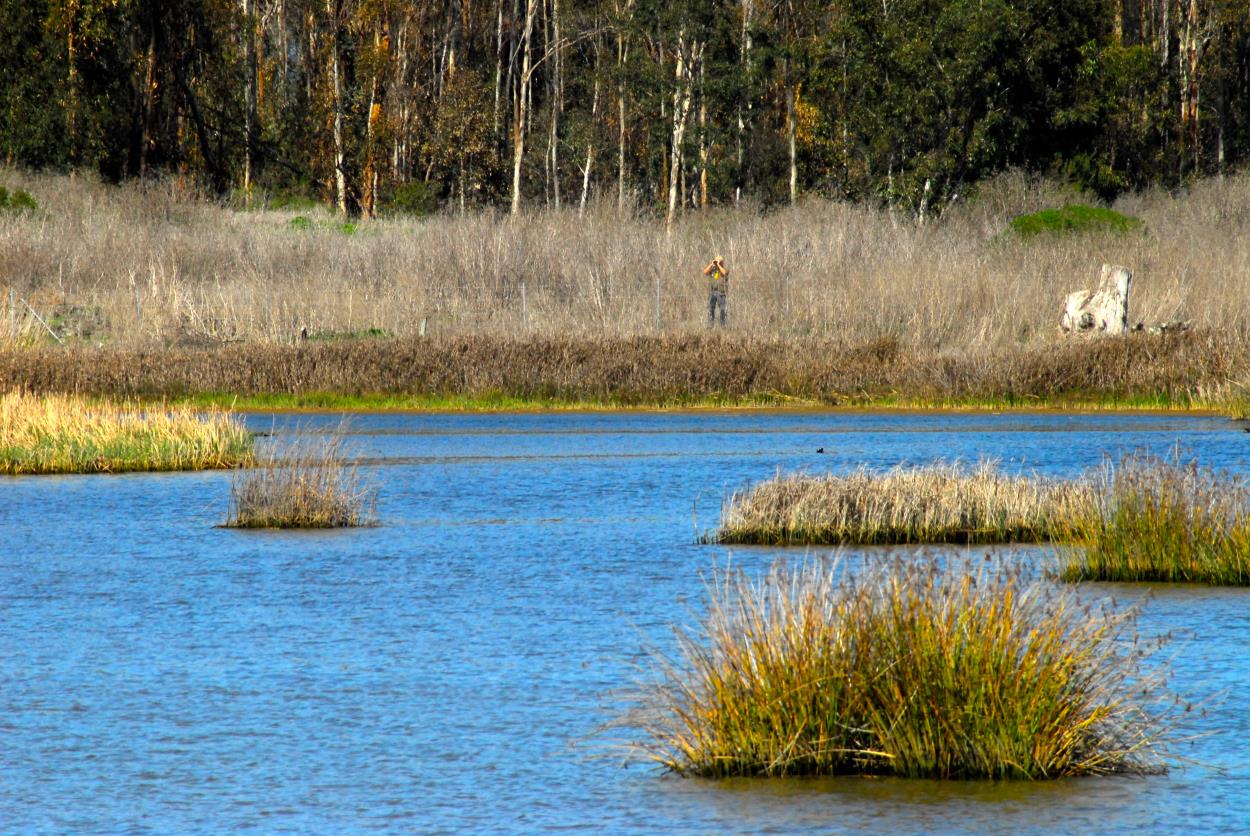 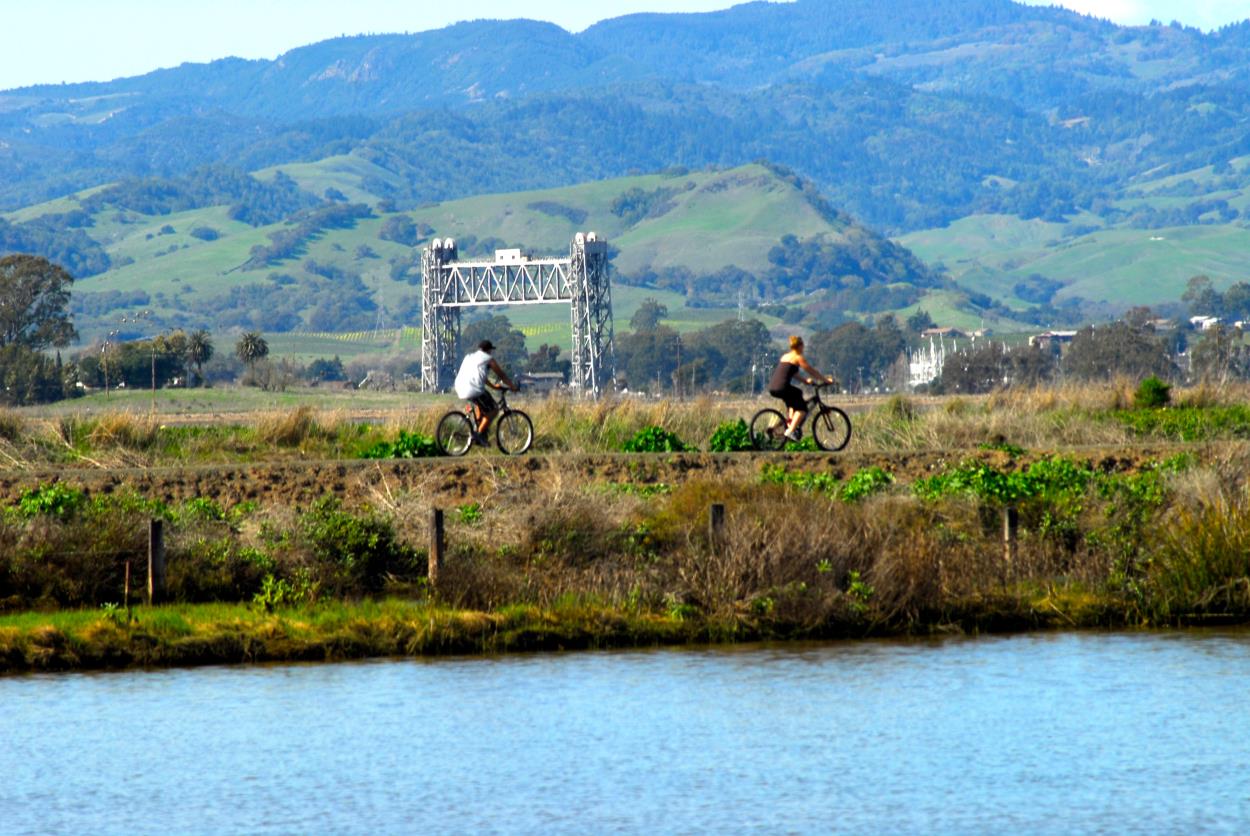 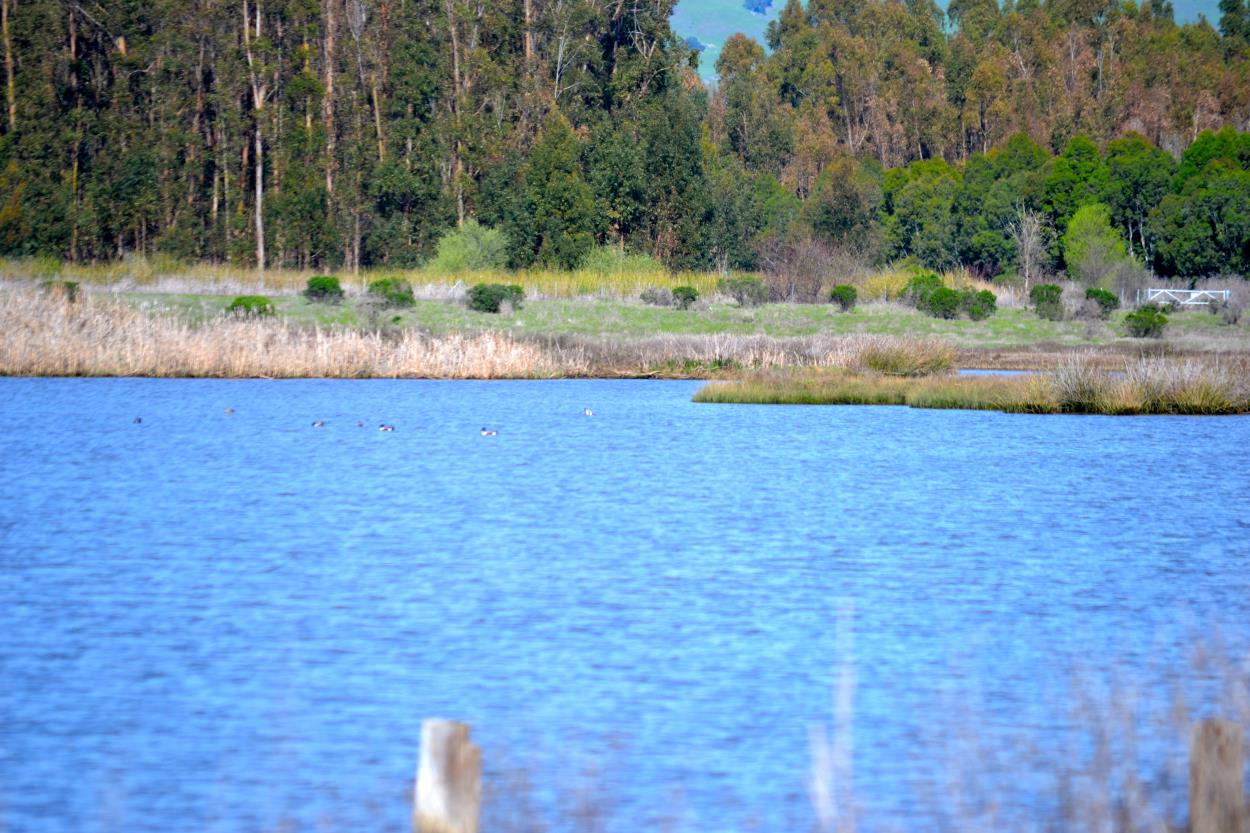 Our waters, wetlands, and uplands are part of an interconnected watershed system that drains into San Francisco Bay, the largest estuary on the Pacific coasts of North and South America.

From its headwaters near Calistoga to San Pablo Bay 55 miles downstream, a drop of water falling at the top of the ridge flows by gravity into the Napa River. There are 47 tributary creeks that flow into the Napa River. Fagan Creek, Sheehy Creek, Suscol Creek, American Canyon Creek and the North Slough are in our community.

The Napa River Bay Trail is located on Wetlands Edge Road and Eucalyptus Drive. Parking is provided at the Wetlands Edge Viewing Area and Trailhead. There are several trail options for an enjoyable day hiking or biking:

History of the Wetlands

THE FIRST PEOPLE OF AMERICAN CANYON

Native Americans from three different tribes (Patwin, Coast Miwok, and Wappo) lived in the Napa Valley and along the lower Napa River for thousands of years. They relied on the abundant natural resources of the area, hunting for elk, deer and bear, as well as waterfowl and small mammals. They also fished in the creeks and marsh sloughs and gathered shellfish such as mussels. They harvested edible portions of native plants and ground acorns for meal from the oak groves of the lower Napa River Valley.

Their way of life was changed forever with the arrival of Spanish and Mexican explorers in the late 1700s and the establishment of the nearby Mission in Sonoma. Native Americans fared poorly during these times. Many were forced to work on the ranchos and suffered during a smallpox epidemic in the 1830s. Following the transfer of California to the United States in 1848, others were forced off of their ancestral lands and sent to reservations.

RANCHO SUSCOL AND THE DEVELOPMENT OF AMERICAN CANYON

Rancho Suscol American Canyon was a part of the 84,000 acre Rancho Suscol granted to General Mariano Vallejo from the Mexican government in 1843. Following a landmark ruling by the United States Supreme Court in 1862, Rancho Suscol was invalidated as a legal property and the land became public domain and available for homesteaders.

Two Irish brothers, Thomas and Patrick Fogarty, originally purchased land in this area. Following the death of Thomas, it became the sole property of Patrick Fogarty around 1862. According to early records, in the 1880s the farm was small but diverse. They kept horses, raised livestock, and harvested barley and wheat.

American Canyon remained relatively isolated until the 1880s, when the Northwest Pacific Railroad and Southern Pacific Railroad extended lines north through Napa Valley, south to Vallejo and west to Santa Rosa. With the railroad came increased economic and agricultural development. Napa Junction (the original name for this area prior to establishment of American Canyon), was an important crossover and connection point for rail lines that went from the rail switching yard and maintenance station located east of Highway 29.

During the early 1930s ditches were dug to drain local marshland, including the low-lying lands to the west of Wetlands Edge Road and to the south of Eucalyptus Drive. These reclaimed lands were used for ranching and farming. In the 1950s, commercial salt ponds were established by Cargill Salt Company along the Napa River north to Green Island Road. The Napa River remained important for transporting commodities to nearby markets in San Francisco and Oakland until early 1900s.

Before the 1850s, San Francisco Bay had edges with extensive tidal marshes. Starting as a Mexican Rancho, this land along the Napa River has seen many uses - from farming, ranching, hunting and fishing to salt production and waste management. By the 1950s, nearly 85% of these marshlands had been diked or filled.

Within the wetlands, a 300-acre site was operated as a municipal landfill from 1942 until the 1990s, receiving trash from Napa and Solano counties. Trash was placed first in pits dug on the drained marshland and covered, then later buried in layers interspersed with soil.

In the 1990s, approximately 178 acres of land were restored to tidal action around the landfill. Located beside the river and in the wetlands, the landfill has been closed, capped and landscaped. It has been transformed into a major recreation opportunity for the region with a multi-use trail, known as Congressman Mike Thompson's Hike and Bike, around its base.

In 2006, the City restored the low-lying floodplains to tidal and seasonal wetlands. These baylands provide habitat for many fish, waterfowl, shorebirds, and wildlife species.

The Clarke Brothers purchased these lands in 1919. They focused their ranching activities primarily on raising beef cattle and growing oats and hay. Typical ranching chores included fencing and fence repair; moving cattle from pasture to pasture; cultivating the soil, sowing, harvesting, cutting, baling and storing dry farmed oats and native hay; and rounding up and preparing cattle to sell at market. The Clarke family ranch was part of the small, closely knit farming and ranching community of this area throughout most of the 20th century.

Over the years, the City of American Canyon grew steadily and is now the second largest city in the Napa Valley.